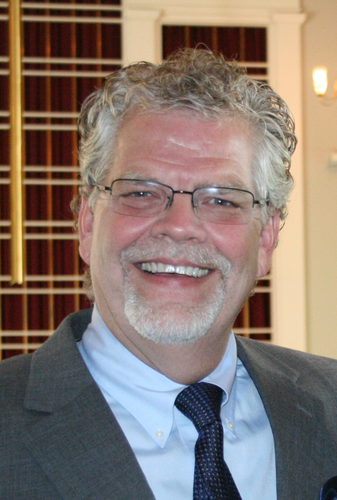 It’s not often that a minister gets a standing ovation, but that’s exactly what greeted the Rev. Keith Stuart on Sunday, March 25 after he was unanimously called to become the settled Senior Minister of Dover Congregational UCC in 2013.

For the previous 11 years Keith was the pastor at First Congregational UCC in Mt. Vernon, Ohio. The church was founded in 1834 on anti-slavery principles and was part of the Underground Railroad. First Congregational’s commitment to social justice issues remains strong today. He commented, “We helped establish a temporary winter shelter for the homeless, worked with Equality Ohio on civil rights issues, and reduced the number of payday lending establishments in Mt. Vernon.”

He led the charge for First Congregational to become an Open and Affirming church. Keith says church members were deeply affected by the illness and death of one of their own, an HIV-positive young man who had been disowned by his family.

Raised in Greenville, Kentucky, he first gained experience in the pulpit as a college student, when the pastor of his Baptist church allowed him to preach. Later he attended Southern Baptist Seminary in Louisville, Kentucky, and was ordained as a Baptist minister.

As a hospice chaplain, he conducted a funeral for a member of a UCC church and found himself being called to the denomination. There was a rising tide of fundamentalism overtaking the Baptist church. He found the UCC to be more open and ecumenical in its traditions, and he liked the autonomy given to local churches. “I was probably always a UCC person at heart,” he said.

His wife Cynthia, an educator, grew up in Greenville too, and they were married right after college. Their daughter Laura and her partner, Ben, currently live in New Jersey and have twin boys, Eli and Julian.   Son Joseph lives in New York City and works for CBS Sports.